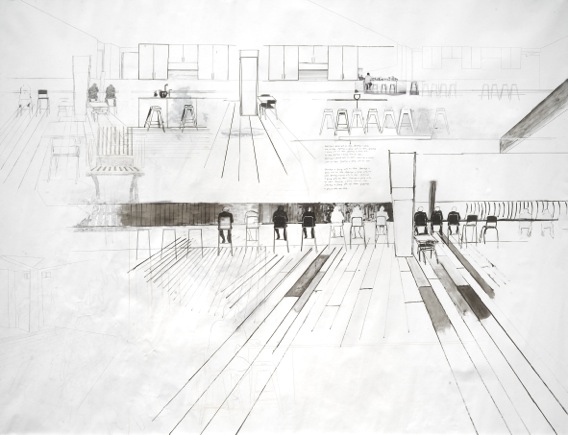 Artists build things that are intimate, complex and nuanced with formative ideas that percolate for years and eventually find their way onto the canvas. Such was the case for Joumana Moukarim as she was in the midst of earning a PhD in Political Science, when she found herself at a turning point, a need to explore her relationship to her surroundings decisively in the public sphere, through drawing, painting and photography.

We all have dissonant impressions of public spaces through memory and experience. As ‘citizen-artists’ our observations, documentations and interventions have become increasingly more important. By exploring various spaces, Joumana was challenged by her own feelings, as well as witnessing other’s sense of isolation, loneliness, contemplation, a need for community and sometimes simply a place of anonymity where one can blend into the crowd and find a moment of peace. 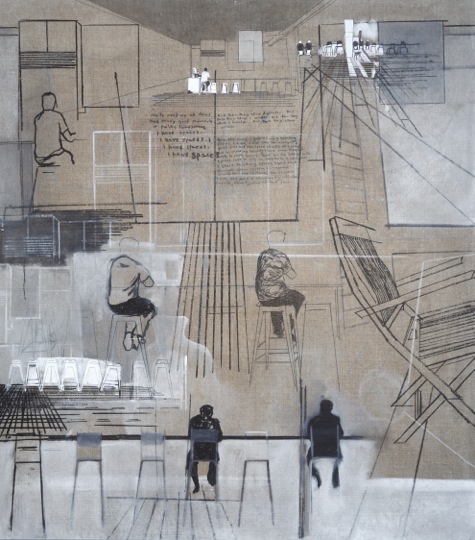 This concept prevails in much of her work as human figures or anonymous ‘subjects’ are often present in large format paintings and drawings that relay a dialect of placement and location, communication, or lack there of. Many of the figures have their backs turned to the viewer. Unfinished renderings and silhouettes of people in crowds seem uninterested and sometimes melancholy and somewhat documentary in nature.

Within the public spaces that inform much of her work, props like chairs and tables that often provide a communal place to gather and interact are sometimes empty, stacked or filled with unsociable strangers. These repetitive figures and architectural lines appear to be transitional elements that guide the viewer from domestic to public spaces and provide a sense of continuity throughout all of her work. This style of expression cultivates a type of seamlessness, a linear narrative of the artist’s associations and experiences.

When Joumana is not out photographing in the urban environment or in her studio working, she is spending time at home as a new mom with her family where her fascination with domestic environment continues to develop and inform her work. In the paintings of her personal space, there is a sense of quiet appreciation for the rooms and objects that are part of her family home life. These multi-media works often incorporate the actual photographs and photocopies that are layered and collaged alongside line drawings and figurative shapes. 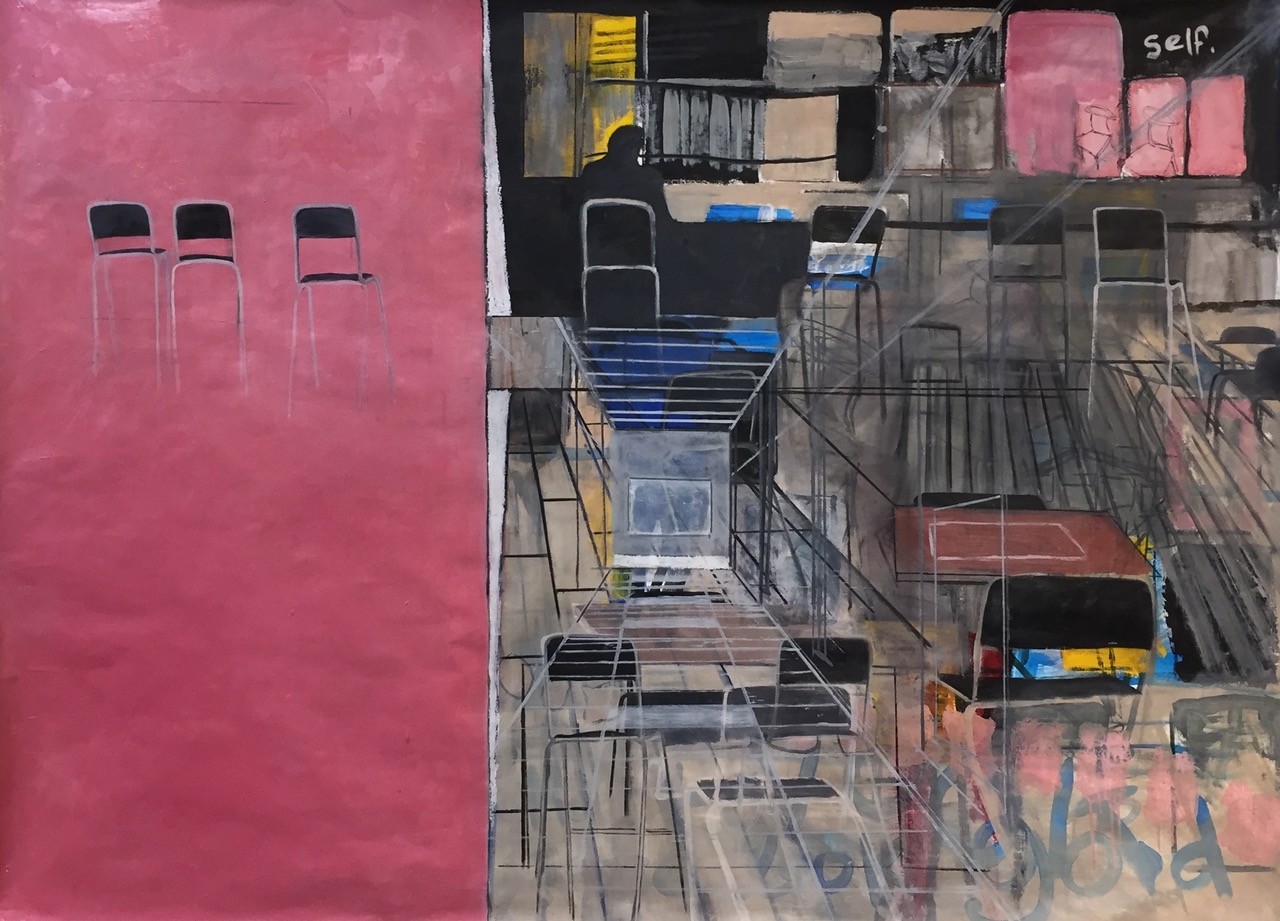 Her photographs are composed of observations and are used as subject matter as well as reference. This process assists her as she incorporates lines and structures that play a substantial role in her oeuvre. It is important to note that many of the under-drawings and paintings appear as architectural renderings, but upon further investigation become distorted and intertwined to the point of disorientation that ultimately affects the viewer and possibly the participants in the painting.

There are several large tables covered with a variety of materials like graphite, ink, charcoal and oil paint that she uses simultaneously. The many photocopies of her images and paper cut-outs are layered along with paint, brushes and pencils covering every surface available and create lines and stacks not unlike the complex networks and shapes in her paintings. Her earlier palette is more monotone, beiges, black, grey and white as seen in Space, Time, Ink and Public, Personal, Smudged. While her more recent colors are glorious pinks, yellows, blues and reds, like in Self.  Her use of spray paint and drips of paint seem less formal and rigid and the figurative lines in Untitled have softened and appear to be in motion, perhaps commuting to and from work.

In U-Curve , a new photographic piece, offers a set of multiple views of a chair arranged in a grid pattern that signals to a new photo-based phase, a study of shadow and light that translates as abstract and conceptual.

This is an exciting time in Joumana’s studio as she expands her view and experience of the world through her vibrant, engaging and ambitious practice. 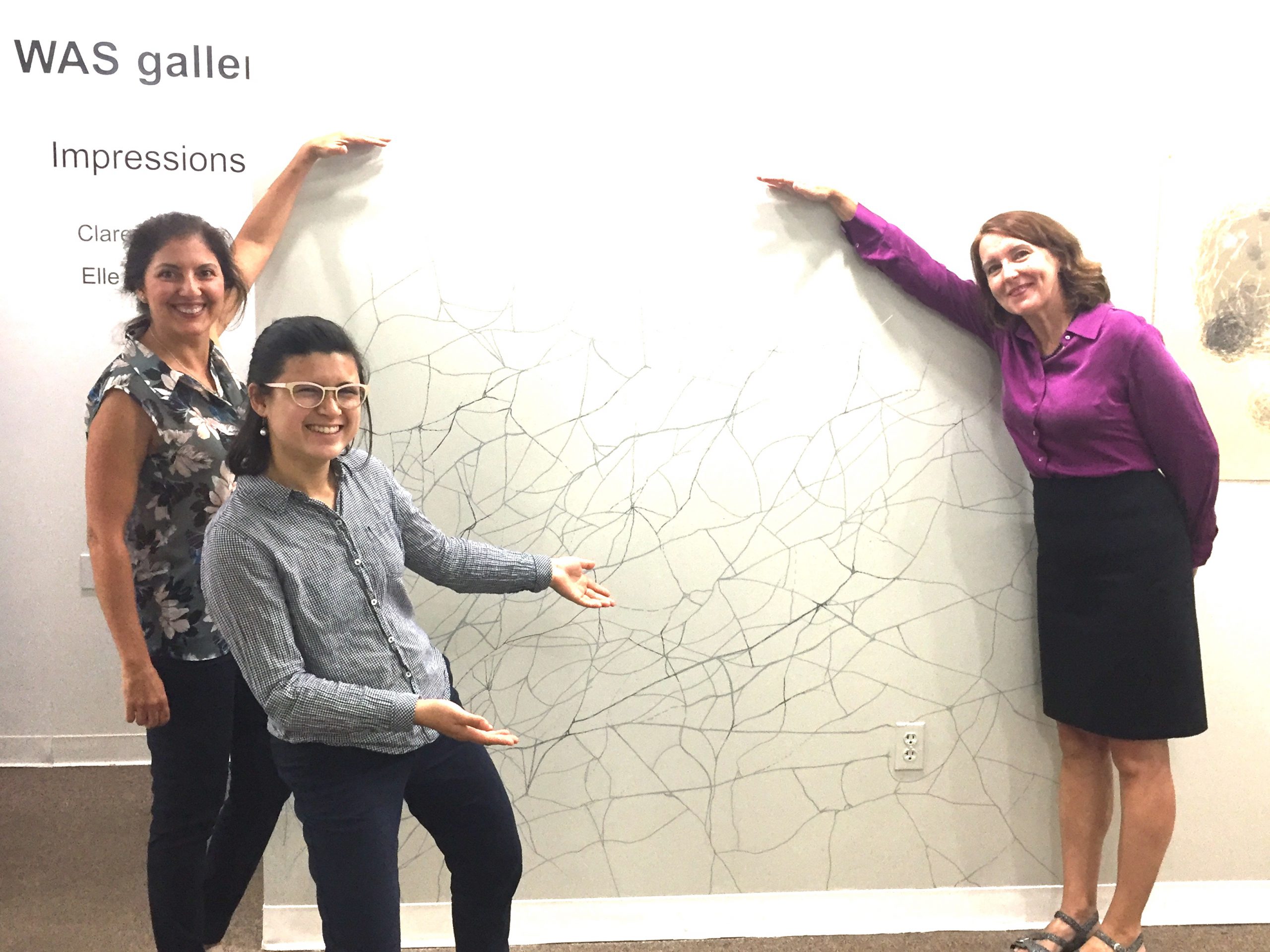 Joumana Moukarim’s creative energies extend beyond her own studio practice and into a new gallery she opened this past January 2017. WAS stands for Westwood Art Studio where she and three other artists are housed. Located in the Westwood Mall on Ridgewood Rd. in Bethesda, MD, WAS exists in a funky old shopping mall that is a throwback to some of its original tenants. A tailor shop with mannequins that seem like they haven’t been changed since 1958 has been there for over 30 years. Across from WAS is the neighborhood’s popular sushi joint called Yirasai that has a sign outside that says Teriyaki Sushi (?!) — a bit confusing but one gets the point. There is also a Japanese language school and a day care center near by as well as a Pilates gym upstairs, and a dry cleaning joint on the lower level. The company is positively diverse and friendly. With many available empty spaces, it is appealing to creative entrepreneurs who have the vision to occupy and transform.

That’s exactly what Joumana did last December 2016. With the help of two of her first artist residents Fabiola Alvarez Yurcisin and Jenna North, they transformed the former commercial photography studio space into what it is now. WAS gallery is seemingly small from the outset however once you traverse it, it feels expansive as it extends to three smaller rooms perfect for video and installation pieces.

The first show was this past January 2017 showcasing the work of all three artists. Since then Joumana has had three exhibitions including “To Be A Thing” with Jen Noone and Travis Childers that garnered a review in the Washington Post.

Although this is her first foray in a Gallery Director role much less a Curatorial role, Joumana has already exhibited artists who exhibit promising talent. Her goal is to feature as many emerging artists as possible and provide opportunities for emerging curators as well. She is reviewing proposals on an ongoing basis and is active in attending events around the Washington D.C. area to seek out artists she would like to invite to show at her space. Artists have the benefit of exposure in a professional space without having to pay a fee and have the choice to sell their work with a commission going to WAS gallery. 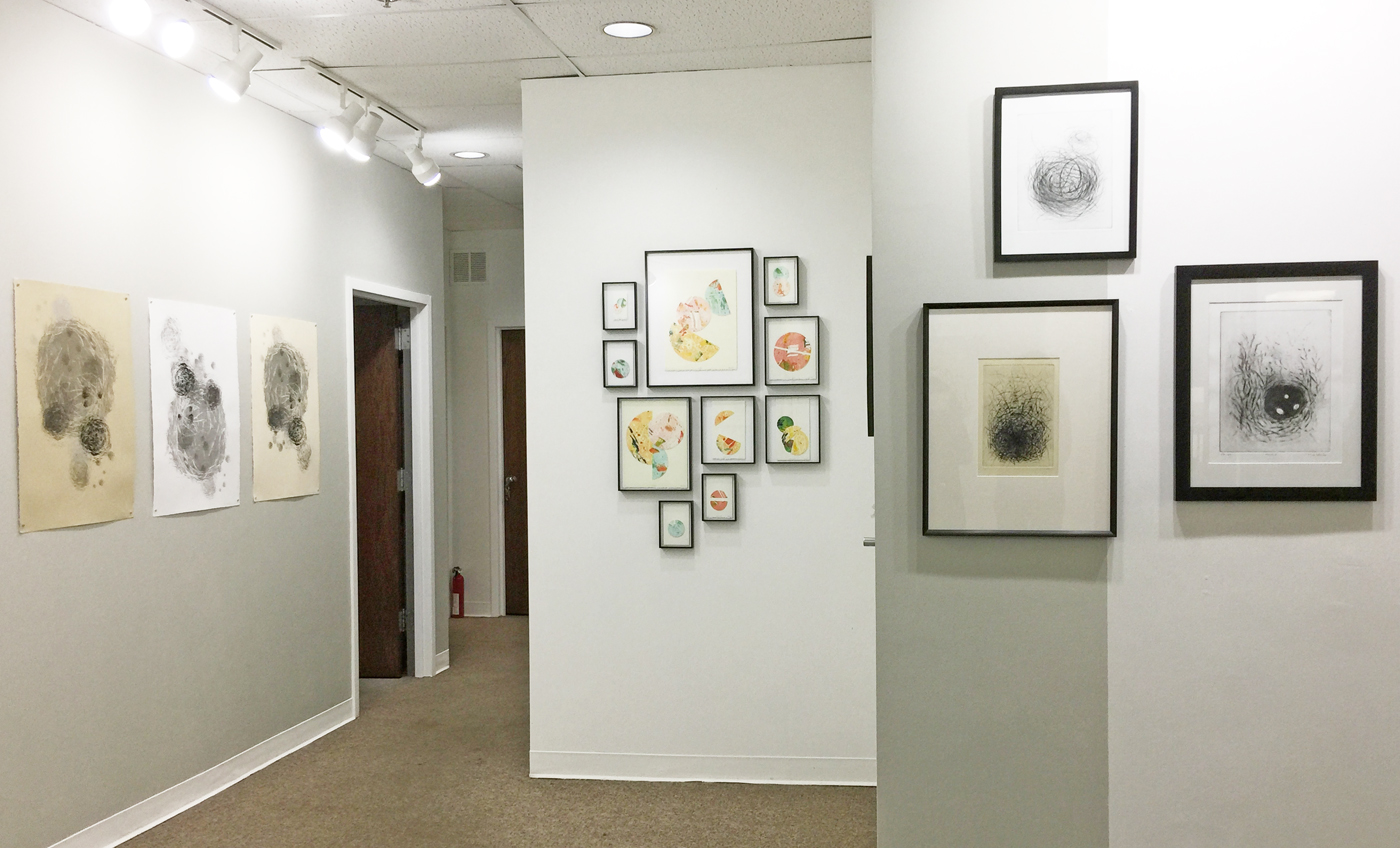 Currently on view is “Impressions”, featuring print works by D.C. artists Elle Friedberg and Claire Winslow up through November 18, 2017.  For more information go to www.wasgallery.com

Joumana Moukarim moved to Washington, DC in 1999 to study Political Science at American University. While working on her PhD, which she earned in 2008, Moukarim was captivated by the DC art scene and began studying art at American University and the Corcoran School of Art & Design. She earned her MFA in Studio Art from American University in 2016. Her paintings have been included in local exhibitions including the First Year MFA exhibition, “[Insert Non-Pretentious Title Here]” at the Katzen Art Museum in Washington, DC, “Small is Beautiful” at VisArts in Rockville, MD, where she was an artist-in-residence, and more recently at the MFA Thesis Show at the Katzen Art Museum. Moukarim lives with her husband and son in Washington, DC. To see more of her work go to her website at www.joumanamoukarim.com