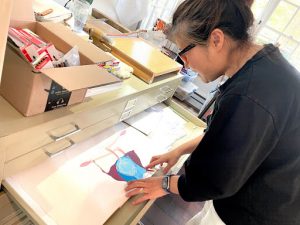 This past year I was fortunate to be included in a collaborative multi-venue exhibition conceived and executed by artist Sue Wrbican and Photography professor at George Mason University in Fairfax, VA. Titled “Cast/Recast”, the project involved a stellar group of women identifying artists whose work spanned the gamut of sculpture, painting, photography, video, and performance. The breadth of work and the quality of the curation at George Mason University and Tehpra Institute of Art was exceptional. The exhibition is now at the main campus in Fairfax, VA at the School of Art’s Gallery.

It was through this exhibition I was first introduced to artist Kay Hwang’s work. Unbeknownst to me, Kay had been an active artist and curator from Baltimore for many years, having served as the Gallery Director of the Julio Fine Arts Gallery at the Loyola University Maryland in Baltimore. Additionally, Kay Hwang was and continues to be represented by Goya Contemporary in Baltimore. After a 15 year hiatus from making art, she now lives in Great Falls, VA with her family and this is where I had the honor of visiting with her at her home studio. 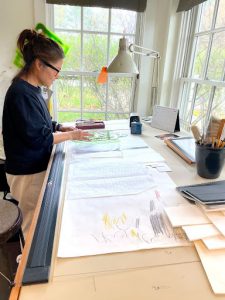 What drew me to her work at the “Cast/Recast” exhibition at the George Mason Gallery in Arlington, VA was the precision and symmetry of the forms drawn with colored pencils on paper. Unlike most artists who work in the language of the abstract or abstraction, Kay’s work is not an all over composition. Her repeated motifs come together to form something organic reminiscent of critters, animals, and even pieces of landscape topographies. She composes these forms almost like a portrait, centrally floating as it reaches out tendentiously to barely touch the edges.

Kay’s studio is located on the ground floor of their home in Virginia. Along one wall is a green chalkboard where one of her sons wrote “Mom Boss” in large bubble letters. The majority of the space is occupied by a large desk and two more large drafting tables. For someone who uses a lot of oils and mediums, being in her studio was refreshing. There wasn’t a drop of paint on the floor nor a whiff of anything toxic. Instead, there were lots of pencils, vellum paper and drafting tools.

She explained to me the inspiration behind these so-called “Schematics”, the very name of her last solo show in 2007 at Goya Contemporary in Baltimore. Her eldest son, who is now 21, was diagnosed with Autism at a young age.  In order to help him develop both fine and gross motor skills, he was prescribed a number of activities that required specific tools and toys. Kay was inspired by these toys and began to draw them as reinventions of their original forms.

Using both stencils and free hand, her drawings grew towards their current forms. They are seemingly highly mathematical, however with something slightly amiss – as if there is an intentional numerical miscalculation. This is what is so appealing about her work. There exists just enough geometric logic to draw you in until you begin to feel that discomfort of something askew and off balanced. They are puzzling and beautifully drawn, and profoundly meditative. The sumptuousness Kay has achieved using pencils on vellum is mesmerizing. It is this lack of evidence where two mediums meet one another that assert a visual language that is practically untraceable, but highly prescient. 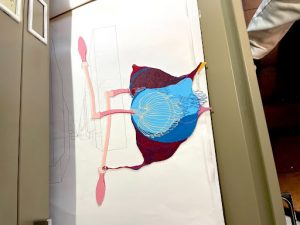 Kay currently also teaches as an Adjunct at George Mason University. She is the quintessential artist caregiver who is devoted to her family, students, and her art practice. When I was there, her mom was visiting from South Korea and had been with her for over a month. She talked about how she hoped her mom would eventually live with her along with her two younger sons who are still both in middle school. She has a lot of love to give and after this George Mason Exhibition, I have a feeling we will all be feeling a lot more of Kay Hwang’s warmth.

“I often wish nostalgically for a world in which art provides models for life; where it describes a rational, compassionate cycle of relationship – citizenship, society, love and humanity. In such a Utopian world, I imagine art might breathe easier and convey more to humankind.” – Kay Hwang

You can learn more about Kay Hwang at http://kayhwang.com